Coming of Age in a Time of War

Ukraine coverage may numb us to the brutality of war. The capture of one town shook me out of it.

Some time in the fall of 2021, I read Susan Sontag’s Regarding the Pain of Others. She wrote about topics we’ve become well-versed in during the era of social media activism — namely, how we’ve become desensitized to the overload of the imagery of war, and that our sympathy now “proclaims our innocence as well as our impotence.” Not only are we habituated to gruesome imagery, but our compassion is equally exhausted. This struck me.

Then, in November, as Russian troops were massing along the Ukrainian border for the second time that year, I watched the Bosnian film Quo Vadis, Aida (2020) about the Srebrenica massacre. Only 30 years ago, cities, not too far away from Ukraine, were destroyed and the international community sat idle, or was even complicit. You often think of war as an abstraction, something you compartmentalize for historical contexts. For me, the film demonstrated just the opposite of what Sontag wrote about — war is imminent, expanding, and you feel it.

For the small bit of time between November 2021 and February 24, 2022, I was scared. It didn’t manifest into anything productive, however. I felt quite helpless. I printed out a poster from Sarajevo’s first annual film festival in 1993, when the city was under siege, and just stared at it in my tiny studio apartment in Toronto.

I compared it to a picture I came across on Instagram from the Odessa Museum of Western and Eastern Art’s exhibit on Vikentiy Kugel, a photographer who died in 1953. In both images, the young boys are doing these spectacular dives and flips through the air, but the images certainly don’t invoke any spectacular feelings. It felt existential, it felt very coming-of-age. 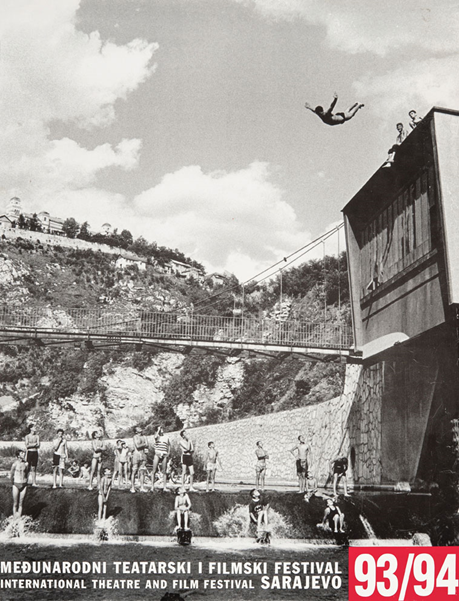 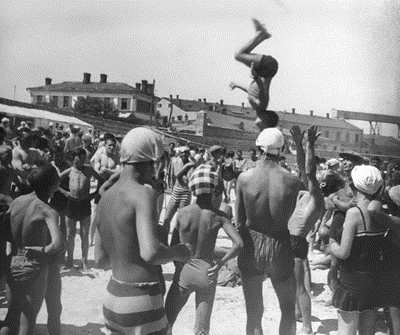 That said, the first couple of days of Russia’s full-fledged invasion of Ukraine invoked a polar feeling to existentialism. I was outraged — outraged that Russian missiles were hitting Kyiv, the city I was born in; outraged that millions of people had to flee home, this world you cultivate for yourself, without knowing if their world will be intact when they return; outraged that people can post their brunch on Instagram; outraged that in Toronto we still obey traffic signals when roads can very well be bombed, so what does that make of our rules of the road?

Then days turned into weeks and at the time of writing this, weeks had turned into one month since the start of the invasion. And as Sontag wrote, sympathy does stretch thin. My outrage did dissipate. My grandparents, aunt, cousins and friends are hiding in bunkers in Kyiv, and I text them almost daily, asking them how they’re doing, while I drink my daily coffee.

The situation has almost become normalized. I would see Ukraine on the news and think, of course I do. That’s the way things are now. That is, until certain moments penetrate my coping-induced-apathy.

Skadovsk was invaded on March 9. This is a seaside town, a sort of a Mecca for travelers, bringing people from all over Ukraine to this town of 17,600 residents. The only way to get there is by train to Kherson. From Kyiv, it’s an overnight train. From Lviv, it takes days. Once you reach Kherson, you have to organize and pay for a private bus, which will drive you to Skadovsk, another two-hour trip. Despite this objectively cumbersome journey, people from all regions of Ukraine, speaking all different languages, still flock to Skadovsk, adorned in huge backpacks and they completely flood the sole grocery store downtown before heading to their next stop. This grocery store equally serves as a meeting place; my friends forged long-term friendships with the people standing behind them in the metres-long line.

The beaches in Skadovsk are renowned for their health benefits — everything from the sand to the seaweed brings babas, their grandchildren and even German pharmacists to clear their lungs and cover themselves with natural clay from the shore. It almost becomes a challenge to get into the water, having to jump over people laying in the clay along the shore. Once you make it into the water, the next challenge you face is all the jellyfish. I used to live in the Atlantic city of Charlottetown in Canada, and I’ve never even seen this many jellyfish. People would joke that the Russian army, stationed not too far in Crimea, somehow pushed the jellyfish into Ukraine.

For the adventure hungry, the island of Dzharylhach is only a short ferry or speedboat ride away. This island offers almost nothing — a couple of water sources, a handful of cafes serving kasha and fresh fish, and of course, the entire island itself for pitching a tent virtually wherever there aren’t swarms of mosquitoes. There, I met influencers and creators of a backpack brand from Lviv. They had portable stove tops and served me tea with cookies and packaged condensed milk.

I was there this past summer, less than a year ago. Earlier this month, Russian troops occupied the town. This summer I was also in Kyiv, my hometown, which I’ve been going back to annually in recent years. But for some reason, it was the news of Skadovsk’s invasion that brought me out of my immunity and normalization of the war. It reminded me of Sontag, of Quo Vadis, Aida, of the ever expanding reach of war. It reminded me of my outrage, which I am sure for psychological reasons, I don’t feel every day. And with this intensified feeling, I am no longer scared. I don’t feel the helplessness I felt in the winter.

I look at my family and friends in Ukraine, at their resilience and their hopefulness. And now I understand you can have a certain optimism, while also understanding that, both globally and historically, peace is the exception and war is the norm. Once I broke out of the compartmentalization of war and consequent illusion of constancy, I held on to hope, because I have to. It feels very coming-of-age.

On March 13, 2022, the mayor of Skadovsk announced that Ukraine won back control of the city.

Open Canada is published by the Canadian International Council, but that’s only the beginning of what the CIC does. Through its research and live events hosted by its 18 branches across the country, the CIC is dedicated to engaging Canadians from all walks of life in an ongoing conversation about Canada’s place in the world.

By becoming a member, you’ll be joining a community of Canadians who seek to shape Canada’s role in the world, and you’ll help Open Canada continue to publish thoughtful and provocative reporting and analysis.

Canada has an opportunity to exert influence in Latin America